Galaxies are titanic conglomerations of Stars, Gas, Dust and more. Bound together by their own gravity, these truly colossal objects are almost island universes in their own right, vast hubs of heat and light in the immense dark void of intergalactic space. Galaxies host trillions of stars at all stages of their lives; they act as stellar nurseries where new stars can be born, host billions of middle aged stars like our sun (many of which will host their own planets) and witness the spectacular deaths of the largest stars in awe-inspiring supernovae. Along with stars, Galaxies are home to many other objects, including hyperdense neutron stars, dark and sinister black holes, and the mysterious and elusive dark matter. Truly, these objects are the most astounding places in the universe, where beauty and structure triumphs over the freezing darkness of deep space. In the image below, you can see the Andromeda Galaxy, the nearest neighbour to the Galaxy we call home, the Milky Way. Andromeda has a vast disk composed of young, blue stars, with a central bulge of redder, older stars. One of the most striking features in this image is the well defined dust lanes, vast gravitationally bound rings of dust that block out starlight. In this image, you can also see M110 below Andromeda, a small satellite galaxy.

Galaxies are not all alike. The Andromeda Galaxy is a Spiral Galaxy, which means it is disc shaped. However, in the image below, you can see the poetically named Elliptical Galaxy ESO 325-G004, which is shaped like a potato. Elliptical Galaxies are very interesting, because they are generally much larger than Spiral Galaxies, and rarely contain any young stars – they are almost entirely made up of old red stars. These galaxies are often therefore called ‘red and dead’ Ellipticals, and there are many theories as to why some Galaxies are Spirals and some are Ellipticals, including the powerful effects of a Supermassive Black Hole! In this image you can see lots of other Spiral and Elliptical Galaxies around and behind ESO 325-G004, along with a few bright stars – these are actually stars from the Milky Way that got in the way when this image was captured.

Galaxies are not static. Over Billions of years, galaxies move, attracted to each other via the force of gravity. Sometimes, Galaxies can get close enough to trigger a collision of apocalyptic proportions, where these two massive objects collide and merge together, eventually forming a new, colossal galaxy. In the image below, you can see a pair of spiral galaxies caught in the act of merging. These Galaxies are nicknamed the ‘Mice’ Galaxies, because of their ‘tails’, where the gravitational forces of their interaction causes streams of stars and gas to be stripped from the galaxies, forming colossal streams of matter. It is thought that when two Spiral Galaxies of a similar size merge, their discs are disrupted and an Elliptical Galaxy is formed, the process driving out all the gas that could be used to create young stars. Over a Galaxy's lifetime, it is thought it will experience many merger events, each one having a unique and powerful effect on the evolution of the Galaxy we see today.

Scientists think that at the centre of almost every Galaxy lies a true monster. A Black Hole of truly epic proportions, with a mass up to billions of times the mass of our sun. These Black Holes are massive (in many cases the Black Hole itself may be significantly larger than our solar system!), but on Galactic scales they are still very small. Despite this, they are powerful enough to strongly affect the evolution of the Galaxy itself. The image below shows an artists impression of an ‘Active’ Supermassive Black Hole, where a large amount of matter is currently being ‘eaten’ by the black hole, which surprisingly radiates a large amount of energy into the Galaxy around the Black Hole. This energy release is thought to expel a further gas from the Galaxy, another process by which Galaxies could be quenched.

The Surface of The Deep

At Southampton, we study how Galaxies change and evolve on the largest scales, to understand more about why the Universe looks the way it does today. A large part of this is simulating thousands of Galaxies in a computer using our best astrophysics and seeing how our models compare to the real Universe. One of the tools we use for visualizing these models is ‘Astera’, a tool created using Unreal Engine 4 that renders a 3D Galaxy catalogue in real time, just like a video game. The video below shows a simulated universe created at Southampton, rendered using Astera. Each point of light you can see in this image is an individual Galaxy, not a star. There are close to a Trillion Galaxies in the observable Universe, but there are only a few million in this video. Please note that sometimes playing this video over the web results in blurry galaxies – if you experience this, your browser should be able to download the video and play it locally, which we recommend.

Video from Astera, Copyright The University of Southampton, all rights reserved.

You may have noticed in the video above that Galaxies seem to cluster together to form structure on large scales. This is called ‘large scale structure’, and is one piece of evidence for the mysterious ‘Dark Matter’ that is thought to bind the universe together on large scales. An important part of simulating the Universe is correctly accounting for Dark Matter’s effects. This image shows a false colour snapshot of a Dark Matter Simulation, this snapshot alone showing space occupied by billions of Galaxies. The structure shows clear filaments, voids and nodes and is remarkably similar to some biological structures seen on earth.

We hope you have enjoyed this brief tour through the Universe

If you are interested in finding out more about what we do, please feel free to get in contact with us. 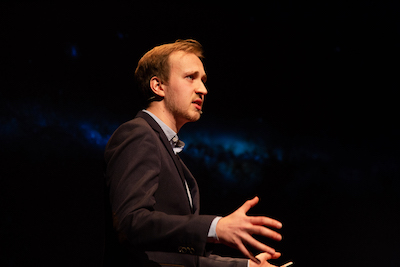 Chris Marsden is a PhD student at the Astronomy group and centre for Next Generation Computer Modelling (NGCM) at Southampton. Chris obtained his undergraduate at the University of Nottingham, and after two years in industry joined the Department of Physics and Astronomy at Southampton in 2017. His PhD explores the co-evolution of supermassive black holes and their host galaxies, with a specific expertise in advanced computational modelling. Chris is currently focussing on the (extremely challenging) modelling of velocity dispersion (the random motions of the stars in an elliptical galaxy) to better understand its mysterious relationship with the galaxy's supermassive black hole. He is also working with Francesco on the creation of cutting-edge AGN mock galaxy catalogues, which are of paramount importance to future missions such as Euclid, Athena and LSST. Chris is the lead developer behind Astera, the project being initially conceived as a simple video showing the extragalactic universe, but rapidly evolving into an ambitious real time rendering using Unreal Engine. He has demonstrated Astera at various events around Southampton, including at a TEDx talk. 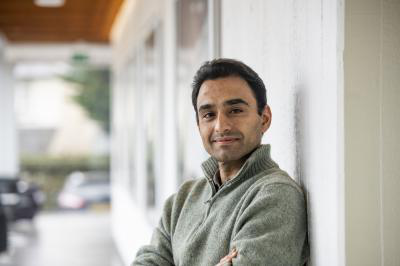 Francesco Shankar is Associate Professor in the Southampton Astronomy group. After obtaining his PhD at SISSA, he moved for a postdoc to the Ohio State University, to the Max Planck Institute for Astrophysics as an Alexander von Hulmboldt Fellow, and then to the Observatoire de Paris as a Marie Curie Fellow. He then joined the Department of Physics and Astronomy at Southampton in 2013. His research revolves around the theoretical modelling of galaxies, their central supermassive black holes, and their host dark matter haloes. He pioneered in the phenomenological modelling of galaxies and black holes based on a combination of abundance matching and continuity equation techniques. He has now started a group in extra-galactic astronomy aimed at specifically constraining the evolutionary channels of early-type, bulged galaxies and supermassive black holes via advanced semi-empirical models. The increasing quantity of future data in extra-galactic Astronomy will have to be paralleled by fast modelling. The extreme flexibility and accuracy make semi-empirical models ideal tools to create full test catalogues for fast predictions and comparisons to data.